A Liar Shall Not Tarry In My Sight!!! 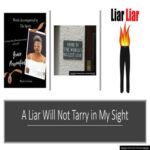 Words Accompanied by The Spirit
A Liar Shall Not Tarry In My Sight!!! 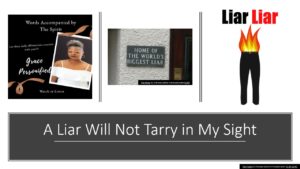 A Liar Shall Not Tarry in My Sight

Yesterday my son had a settlement conference. A young woman was assaulted by her boyfriend and/or dope dealer. And instead of being truthful, she is allowing my son to be prosecuted for it.

What is sad, but not uncommon is that the judge, prosecutor, and everyone involved is aware of his innocence. The detectives even subpoenaed his cell phone records. Showing that he was more than an hour away from the location at that time.

As we were leaving, my son’s attorney stated that this was a hard-core case. I looked directly at him and told him, “No it’s not. Because my son didn’t do what he is being accused of!” He then stated that the prosecutor has a witness that is adamant that he did. My response, “She is a liar”.

Now my son’s attorney is aware of this miscarriage of justice that is being perpetuated against him. But this individual will sit in my son’s face and blatantly lie. As if it should just be accepted and overlooked. I have become too old and too wise for this.

I warned my son to never allow someone to speak a lie into his life without correcting them. It doesn’t matter who they are. For anyone who reads or listens to this, SPEAK YOUR TRUTH!!!

People do not realize the spiritual implications of these situations. The Word of the LORD is clear. A liar shall not tarry in His sight.

The Revelation Given to Me as a Child

When I was a young child, the LORD told me how judgement would be for those who refuse to acknowledge the truth. The Holy Spirit showed me that in retribution, the minute that a falsifier opens his mouth, they would be banished to eternal damnation. They won’t even be allowed to speak because just like in life, their guile will continue in death.

Mary K. Baxter wrote a book entitled “A Divine Revelation of Hell”. I read it and knew that she had experienced her writings. But there are those who believe that their privilege, entitlement, skin color, and the devil himself will save them from the wrath of God. It won’t!!!

What stood out to me was that when Jesus approached them in hell, they would scream and beg for forgiveness, feigning repentance, and begging for another chance. Jesus responded by confronting their lies. He knew their spirits. Recognize this stark realization!!! They continued to try to even deceive the Creator. While in hell. In eternal torment. The God who knows and is aware that the heart is despicably wicked.

I am cognizant of the fact that this attorney, like many others, was willing to live a lie for his benefit. Liars have an errant contempt for the lives of others. Verifying why a liar is equated with being a murderer.

Some believe that they are gods. Relishing the fact that they have your lives in their hands. These sociopaths are psychopathic in nature. This is prevalent in many occupations that have direct or indirect influence over the lives of those that are dependent upon them.

When you know the truth about someone, and I will put this here, when you know the nature of a thing, then you will know what it is capable of! Because we wrestle not against flesh and blood. But against spiritual wickedness in high places.

Liars are being judged by God. It doesn’t matter if they admit it or not. Confront the fabricator with the truth. (If it is safe to do so, otherwise, leave silently. The truth can also be a dangerous trigger to an unstable person.) It is then up to the individual to receive it and repent. Accordingly, you have cleansed your hands of their blood and their actions will return upon their own heads.

And please don’t fool yourself into believing that you can wait until you are on your death bed and repent. God will not be mocked.

My advice to you: Don’t receive a lie that someone is attempting to assert into your life. That in itself is terrorism. This deliberate deception is committed by someone who despises you. This may seem harsh, but it is true.

This is God’s Word, Not Mine

“These six things doth the LORD hate: yea seven are an abomination unto Him: A proud look, a lying tongue, and hands that shed innocent blood. An heart that deviseth wicked imaginations, feet that be swift in running to mischief, a false witness that speaketh lies, and he that soweth discord among brethren.” (Proverbs 6:16-19 KJV)

Even though there a numerous proverbs concerning the liar, this is one that I use to discern the character of an individual: I am validating His Word because it is imperative for your mental health and stability, and even your very life, that you remove these people from your lives. That you may see them for who they truly are.

“He who hates, disguises it with his lips. But he stores up deceit in his heart. When he speaks graciously and kindly [to conceal his malice], do not trust him. For seven abominations are in his heart. Though his hatred covers itself with guile and deceit, his malevolence will be revealed openly before the assembly” (Proverbs 26:24-26, AMP)

A liar is detestable in the sight of the LORD. Described as being wicked, vindictive, sinister, and evil. These are a few synonyms associated with the term malevolent.

We all fall short. But there are those who have no conscience. It is who they are.

Are you allowing a liar to wreak carnage in your life?