Written by Agraciouswoman on June 2, 2022 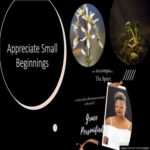 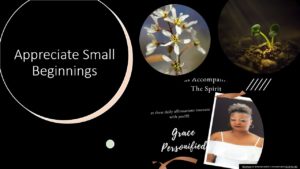 Yesterday as I was preparing to put up a video, I noticed that I had two new subscribers. My first two, to be exact. Even though, one was my son, I am thankful and excited.

Humbled, I cherish the little things. As it is written, “Who [with reason] despises the day of small things (beginnings)? For these seven [eyes] shall rejoice when they see the plumb line in the hand of Zerubbabel. They are the eyes of the LORD which roam throughout the earth.” (Zechariah 4:10, AMP)

Even the LORD, in all his majesty, rejoices in this. As I continued to read from 1 Kings 20, I recognize the utterance given.

KIng Ben-hadad was coming against the king of Israel. Ahab conceded to his initial demands. Willing to give up silver and gold. Besides his wives and children.

Consequently, because Ahab was willing to give up without a fight (for the sake of peace), Ben-hadad then changed the terms of the agreement. Wanting more. This is an epiphany for me.

Ahab knew that if he allowed this, Ben-hadad would pillage the land and there would never be an authentic truce. Ahab was being oppressed.

Ben-hadad even bragged before Ahab gave him a prophetic warning concerning his arrogance.

Albeit at one point, the army of Israel was described as two flocks of goats. While Syria’s army “filled the country”.

Although small, it is God who fought for them. All they had to do was believe. What is imperative, is that when Ahab asked, who shall begin the battle, the prophet commanded by the LORD, that Ahab would.

In order to be successful, to invoke the blessings of God, we must trust Him and His will for our lives. The circumstances may seem dire. The enemy may hover over us like a Goliath. Looking to destroy us. But even in that battle, David ran to meet him.

Our faith is shown in action.

I told my youngest son and daughter that I was thankful for the two subscribers. Truly blessed. Saying that some would say, I have hundreds, thousands, hundreds of thousands, and even over a million. Nevertheless, I welcome my small beginnings.

I will Not Waiver

Why? Because this is something that the LORD is building with and through me. One to one. The ultimate Source, providing me with unlimited resources. I am enjoying the time that we spend in intimate fellowship.

Now don’t get me wrong, my flesh rises up and I may get discouraged. I don’t internalize it. I will not allow the world’s expectations or criticism to overwhelm me. To make me feel less than.

I know the promises that God has for me. Plans to prosper me. Likewise, I am never concerned of wealth and materialism.

When you have survived and thrived in spite of, you are prepared for the sun and the rain. If you have weathered the storms with the right mindset. Or at least striving to conquer those thoughts that are contrary to walking in the Spirit. Even though you may lose some things, you trust that Jesus is making room for bigger things.

I have tested and will test God and know that He will open up the windows of heaven and pour out for me such great blessings. I will not have room enough to receive them.

Because he is preparing my heart, the overflow will bless others.

I know that He is, my everything!!!