Written by Agraciouswoman on August 3, 2022 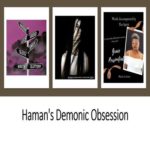 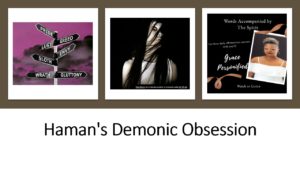 As I read the book of Esther, I realize that I share a similar characteristic of Mordecai. Never feeling the need to honor men. This is with exception. I am aware of the perils of ungodly relationships, soul ties, and trauma bonds.

For obvious reasons, I am past that now. Accordingly, I wipe the dust from my feet and keep it moving. Even when it hurts.

Notwithstanding, I have always had the mindset that I value no man above Jesus. Even those in authority. Moreover, I know from whence my help comes.

Regardless to whether you are the president, renowned entertainer or businessman, employer or supervisor, millionaire or billionaire. You are but a man. We can’t save our own souls alive. This is evident in the “ancestors” that have died before you.

Mordecai would not bow to Haman!!! This has nothing to do with pride, this is about reverence of the one true God. As Haman, individuals place high esteem in self-regard and the need to be recognized. Hence the prevalence of being honored and glorified. To feel like gods. It has never made sense to me.

Haman became enraged. Seeking not only to destroy Mordecai. Seemingly wanting to extinguish all of the people of God. Moreover, please know that the battle is always spiritual.

When Mordecai learned of Haman’s plan, he was distraught. Refusing to take off his sackcloth and present himself in a decent manner. According to man. Knowing that the matter is in God’s hand.

I feel the need to point out that when you are in a position of authority, you must be mindful of who is serving you. Don’t allow pride to blind you to the vulnerability of your disposition. King Ahasuerus (Xerxes) should have been more diligent in inquiring as to why any man would want to extinguish an entire group of people. The matter should have never gotten this far. Nevertheless, the LORD knows the beginning to the end.

Trusting God When the Why is Unclear

Mordecai most likely was clueless as to why he advised Esther not to reveal who she was. Likewise, Esther did not question her uncle. Resolving herself in obedience.

When you don’t understand what God is doing, just be willing and obedient. It is imperative to know that the Holy Spirit is omnipresent. Remember this!

Haman was so fixated on his status. In his feelings. That he cast lots for an entire year as to when he would approach the king in this matter. Let me repeat that he relived this thing for a whole year. Plotting. Undoubtedly studying and learning the king.

What man fails to realize is that the devil is not only subtle, but patient. Haman cunningly approached the king as if he was coming from a place of sincerity. While offering a bribe. Appealing to the king’s ego.

I have seen a corrupt judge handled in this same manner by unprincipled attorneys, including one that was particularly shrewd. The warning that God had for this judge. One day that attorney is going to introduce a document that the judge will unwittingly sign that will lead to both of their political demise. It is foolish to trust a “Haman”.

When Haman’s plan was revealed to Esther, she was hesitant to get involved at first. Undoubtedly comfortable in her role as queen. While possibly preferring to avoid conflict.

But Mordecai was faithful that God would deliver His people from the hands of their enemies. Mordecai warned Esther that if she did not do what she was ordained to do that the outcome would be worse for her household. This confirmed the revelation of what would become of the king due to unwise counsel and choices made on his behalf. The lack of discerning the evil in his midst.

Esther’s diligent inquiry of the matter allowed her to be able to move accordingly. She walked gracefully in her position as the queen. Even though Esther had a formal but humble upbringing. Mordecai took great care in instilling in her the values and ethics that she needed to succeed in every aspect of her life. Aware of the rules and what was expected of everyone.

In her wisdom, she sought the LORD. Knowing that she could be killed. Calling for a fast for three whole days. With nothing to eat or drink. Completely cognizant of the seriousness of the situation. In her fortitude, she determined the matter correctly.

The king had not summoned Esther in thirty days. By entering the king’s presence uninvited, Esther was risking her life.

But God gave her favor in his sight. Not only that but when the king saw her, he immediately knew that she was troubled. He loved Esther enough to ‘learn’ her. Even among all the other numerous women.

Sadly, this is where she lacked. She didn’t realize the influence that she had in his sight.

Listen to how he confirmed it. When she came before king Ahasuerus, he offered her up to half of his kingdom. Not once, but three times.

Those around king Ahasuerus knew his personality. Remember that Haman took a whole year to approach the king regarding his evil plan. Even Esther didn’t reveal her reasoning for coming to him right away. She prepared three lavish banquets prior to making her request known.

King Ahasuerus’s rashness led Vashti to be vanished from being queen. Signifying his instability at times.

Now I will stop here because there are so many gems that I want to savor this Word. But know that the devil is crafty. He knows how to enter into your presence so that you may receive him with open arms. Read or repeat that again.

So, I will ask you. Do you have a Haman in your midst?