How Long Will You Waiver?

Written by Agraciouswoman on June 1, 2022

Words Accompanied by The Spirit
How Long Will You Waiver? 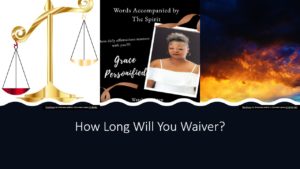 How Long Will You Waiver?

True prophets are not a dime a dozen. People proclaim to be prophets every day. Obeying the LORD is not glitz and glamor. Prophets are despised for telling the truth. For rendering God’s judgment.

Just as it is written and forever remains written, “For Your sake we are put to death all day long; we are regarded as sheep for the slaughter (Romans 8:36, AMP). But we are precious in the eyes of the LORD.

Moreover, when Elijah healed the widow woman’s son, it is written that God heard him. Consequently, while confronting the people of Israel and Jezebel’s prophets, Elijah told the Israelites to choose. I believe he was frustrated at that point. “How long will you hesitate between two opinions…”

Nevertheless, be mindful that Jezebel’s prophets told her what she wanted too here. Appeasing her. Even so, the Israelites silence in that moment spoke volumes. People are very aware of the choice between good and evil. Additionally, some will think that if they just say or do nothing it will absolve them.

Denial Will Not Exculpate Us

“For ever since the creation of the world. His invisible attributes. His eternal power and divine nature have clearly been seen. Being understood through His workmanship [all His creation, the wonderful things that He has made], so that they [who fail to believe and trust in Him] are without excuse and defense (Romans 1:20, AMP).

This is why Joshua called heaven and earth to testify against Israel. God’s entire creation is a testimony against those who refuse to believe. And not another word has to be spoken.

Furthermore, as I mentioned before, people would think it ridiculous when Joshua proclaimed that the rock would be a testimony against Israel. Albeit a stone cannot be easily destroyed or obliterated. (This is spiritual.)

Does anyone wonder why God wouldn’t honor the man’s request to send someone from the dead so that his brothers may believe? Pay attention to how Jesus answered him. He told them that they have Moses and the prophets. If you are not willing to listen to the living, you will not listen to someone who rises from the dead.

The Heart is Despicably Wicked

Accordingly, the Holy Spirit knows our nature. It is written, “these people honor me with their mouths, but their hearts are far from me.

I can attest to this. When I look at the sun, the moon, and the stars. The beauty and majesty of nature. The oceans and the seas. In addition to the intricacy of the human body.

Evident in the destruction that takes place every day. Man has a blatant disregard for the resources that were meant to sustain us. Notably, the fact that there is no formula for infants in America. Droughts and raging fires that can’t be quenched. It is clear, that the earth is being obliterated at the hands of men. At an accelerated rate in this country.

Understandably sad, is that in this dire state, people still foolishly choose to oppress, and tear down one another. They continue in their evil as if they will die and that will be the end of it. Still there remains an egregious lack of accountability.

What is Love to You?

Therefore, when some say that they love their children and their grandchildren, I consider it a lie. This may seem harsh. But look at what they will be left to contend with.

The bounds of sin will not be undone. Evil powers are ruining the earth through men. And we facilitate it. Thereby keeping ourselves distracted with foolishly held beliefs, attitudes, and deceptions.

So, for the life of me, I will never understand and agree as to how any person can blame God for what is surely direct and ambiguous consequences of our own actions. Or lack thereof.