I Choose to Speak Life!!! 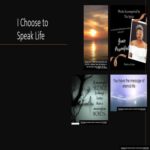 Words Accompanied by The Spirit
I Choose to Speak Life!!! 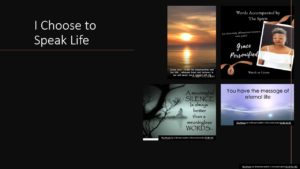 I Choose to Speak Life

Yesterday I went to orientation for a new assignment. Prior to this, I requested a set schedule and never received a response. The Spirit warned me that they never intended to take my petition into consideration. So, because I was now actually on the job, I needed clarification on other things.

As of yet, I had no idea where to report to. (Orientation was in a designated facility but separate from all the other entities.) I got an email from them stating that they never received a request for block scheduling for me. This just confirmed what the Holy Spirit told me because I made the request myself via the same email on 12/29/2021.

I was kind of perturbed, as we travelers can be hundreds of miles from home and feel that it is just a courtesy to extend, as we are fulfilling a need.

While driving home I was upset and thinking on the matter. (An attack of the enemy.) There were so many negative aspects because since this assignment was literally a couple of hours away, I would try and go home as much as possible.

Throughout this I kept saying and thinking that what the enemy (and people with bad motives) thought to bring against me for evil, God is going to turn it for good, to be a blessing.

Admittedly, I did fret at times and complained about the situation to others and this morning as I am communing with the Holy Spirit and reading out of the book of John, I came to John 11: 41-42 when Jesus was raising Lazarus from the dead and He acknowledged and thanked the Heavenly Father for hearing Him. He also made it a point to say that He is speaking it so that others may believe.

The Holy Spirit convicted me and reminded me of Deuteronomy 30:19. Jesus spoke those words in the midst of unbelievers in the natural and spiritual. He was setting the example to choose life.

I had been negative to people about the situation and then I went to God as I was driving home and I was truthful to Him about how I felt and I drove in silence, to listen, to hear Him. He gave me a revelation on what to do in the situation. I thanked and praised Him and it was so profound because it addressed all my concerns, and as long as I am obedient it doesn’t matter how they schedule me.

While I was murmuring, all I needed to do was seek Him. I didn’t have to speak on the situation to no one but Him. In most instances, man can’t or won’t offer a solution and we have also sinned against God.

It was even more clear that when we are patient and pursue Him, His Word is true. 1 Corinthians 10:13!!! I was speaking death on my situation to mere man and He just reinforces the importance of speaking life because whatever we speak, (this is profound) it has to be manifested. I am learning to choose life that I may live!!!

I must also write about the revelation given concerning John 11: 8-10. The disciples were questioning Jesus returning to Judaea because they had just attempted to stone Him at least three times. He responded that there are 12 hours in a day and he who walks in the day does not stumble, but he that walks in the dark.

It made me ponder our relationship. The Holy Spirit will let us know the dangers, trials, tribulations and intent of the enemy so that we are not walking in darkness. And on the other end of the spectrum, how the enemies of God walk in darkness and always stumble because they have no light. Their deeds are evil. They are spiritually blind and deaf. There plans cannot come to fruition because of obscurity.

Even what they think they are hiding is revealed by God.

This was confirmed and God just said, literally, not to worry about it because that was not a part of our plan, nor will it affect our plan.