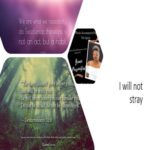 Words Accompanied by The Spirit
I Will Not Stray!!! 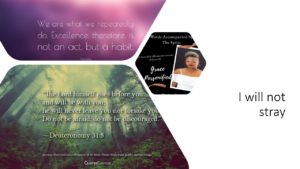 While at work yesterday I got upset with a couple of my patients who were manipulative and deceiving. I have seen this before and although it speaks to their character, I decided to stay away from them. With the exception of what was required of me. And even then, I fell short and did not even do what was incumbent of myself. Pride put a wall up and within myself I felt as if they did not deserve God’s mercy.

I was wrong. The Holy Spirit corrected me with two glaring examples to confirm what He wanted me to realize and to never do again.

The first example was a video that I was watching.  Accordingly, the pastor spoke and said that if you allow your emotions to control you and take you off course, then to “Just sit down!” The assignment that God has for you doesn’t stop or change because you are having a bad day. In other words, if we are going to be unstable and double minded, we need to give up completely. Because God’s will is going to be done regardless!!!

I received the second confirmation as I read Joshua 7:10. Joshua fell on his face before the LORD and could not understand why they were defeated before the Amalekites.  Nevertheless, God told him to “Get up! Why is it that you have fallen on your face?”. It immediately brought to remembrance when the LORD told Moses the same thing almost exactly verbatim in Exodus 4:15, “Why are you crying to me? Tell the Israelites to go forward!”.

God has an assignment. It is not for the weary or the erratic. His call is a call to action. Unrelenting. Resolute. As His people we must be prepared which is why He admonished us to put on the WHOLE armor of God.

I was already convicted before I left work and came to the realization that a nurse was being petty towards me to show me how that looked in myself.

It is something that is much needed for this time in my life. As the LORD and I embark on the greatest venture ever. To show me that there will be days that I feel depressed, downtrodden, and defeated. But as the LORD spoke in my spirit, when we are given an assignment, He gives us an arsenal. Everything that is needed to be successful.  As I say often, It is not about you or me.
The race does not go to the swift but the one who endures to the end. Profound!!!

I will reap the coals that glorify God and that brings about a desired end.

Albeit, as I listened further to the video, I received the fact that when someone or something is grieving me, it is that the Holy Spirit is also grieved.

As I have said before, “God gets tired too”!!! But it is still up to me to handle the matter appropriately. Without judgment. Allowing God’s discernment to say, when to move on.