Written by Agraciouswoman on August 17, 2022 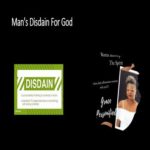 Words Accompanied by The Spirit
Man's Disdain for God!!! 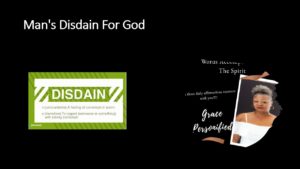 As I commune with the LORD, I am reading from 1 Samuel 4-7. God was bringing judgment upon Eli and his sons Hophni and Phinehas. Additionally, there is a war between Israel and the Philistines. As the Israelites continue to take the LORD for granted. Their defeat will be inevitable.

Besides, this is partly because they chose to continue following the men that disrespected God. As the Israelites themselves continue to worship idols. Nevertheless, they expected that they should prevail. And their behavior is overlooked.

Even so, their acts were so grievous that initially when the ark of the covenant of the LORD came into the camp, the Philistines were terrified because they had heard of the terrible acts God had done to Israel’s enemies in the past. Including the Egyptians. The Israelites refused to honor Him and hardened their hearts.

The Philistines defeated Israel. Captured the ark. While becoming as callous toward God as the Israelites. Even setting the ark next to their god Dagon. As if He was just another common idol. In addition, holding on to the need to feel that they and the statue built by the hands of man, could save themselves. Thus, the conquering of the God of Israel.

God in His righteousness plagued them with tumors. Mice ravaged the land. And the people were dying.

The Philistines had no choice but to acknowledge the LORD’s sovereignty.

The Glory of the LORD

The awesome way that the ark returned to Israel is beautiful (1 Samuel 6: 7-13). Still the Israelites did not follow God’s commands. There was no respect for the LORD. And they continued to approach Him with contempt. Consequently, the LORD struck down 50,070 men as a result. Giving the Israelites no choice but to fear Him. Even if not done reverently.

The effectual fervent prayer of a righteous man availeth much (James 5:16b).

This scripture has always stood out to me because some people think that the more people that pray for you the better the outcome. This is not so. It may be that one of them is righteous and God will hear them. This is why ‘man’ is used in the singular form.

This is confirmed by the prophet Samuel admonishing Israel to turn to God with all their heart, mind, body, and soul. To remove the distractions from among them. It was Samuel whose prayers God honored. Allowing the Israelites to defeat their enemies.

Nonetheless, it is compelling, but also pleasing that He wants to have an intimate relationship with each and every one of us. When your heart is right with the LORD, you will praise Him when you wake. Throughout the day. And at night.

Your spiritual eye will be opened, and you become thankful. Recognizing that He truly is always working on your behalf. I see it every day. At times it is hard to explain because people take so many things for granted. So, as I notice what seems miniscule to others, it is immense for me.

Trials and tribulations will come. Moreover, it is better with Him. Then alone. Or with mere men. I am continually in awe and inspired by His preeminence.