The Colt vs The Horse!!!

Written by Agraciouswoman on May 3, 2022 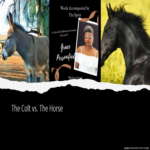 Words Accompanied by The Spirit
The Colt vs The Horse!!! 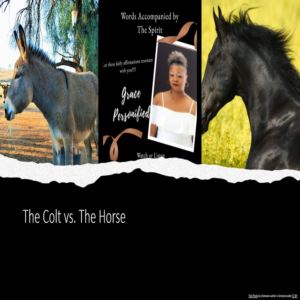 Jesus came riding on a donkey.

As I read this, I felt that there was a message that the Holy Spirit was imparting as to why He chose the colt instead of the horse. So, I will differentiate the characteristics of the two.

Horses are stronger but scare easily and may not sense impending danger. Whereas the colt can only carry a fraction of the weight but are more reliable and actually avoid danger. Donkeys also have excellent memories, with the ability to recognize people and other donkeys up to 25 years later. Horses are faster and live longer, nevertheless they are skittish. Donkeys, on the other hand, are more reliable and will stand and fight against their enemies.

Think of the mule that was used to forbid the madness of the prophet. Speaking in a human voice, the donkey saw the Angel standing in the rode preparing to kill Balaam. Its instinct was to protect himself, but in doing so he saved Balaam’s life.

It was the fast, furious, unrelenting driving of the horses that the Egyptians rode into the Red Sea that led to all of their demise. They chose horses because of their power. Jesus chose the donkey because of its calm, slow, but steadfast discernment.

When Adonijah attempted to usurp the throne from king Solomon, David had his servants place Solomon on his own personal mule to signify that David chose him to reign in his stead.

The Humble Spirit of the LORD

Some trust in chariots, and some in horses: but we will remember the name of the Lord our God. Jesus is so meek, yet powerful. The Creator of the heavens and the earth and all that is therein.

It is said that the Israelites expected that when He came there would be no doubt that He was God. Leading to many of them abandoning Jesus as their LORD and Saviour.

This is why establishing a relationship with the Father is so important. When God showed himself to Ezekiel, He proved His authority in the great and powerful wind, the earthquake, and the fire…Then a still small voice.

Man’s Destructiveness vs The Gentleness of the Spirit

Man-made inventions can wreak havoc and annihilate his existence upon the earth. Yet, in all of this, I see a pride in man that refuses to see that he is as frail as the dust. Even when death is lying at the door. When they recover from illness, they brag of their strength and their might. Never once giving glory to God for His mercy.

But the Holy Spirit (the gentleman) deals with him as such, in gentleness. The Spirit is so powerful that we cannot stand in His presence without being consumed.

Yet He only, has allowed me to live. I will bless Him always. His praises shall continually be in my mouth.

There is a profound revelation in this!!!