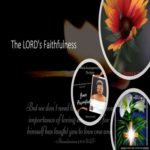 Words Accompanied by The Spirit
The Lord's Faithfulness!!! 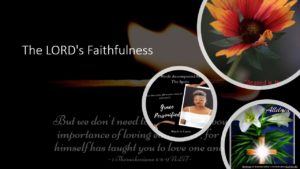 As I read in 2 Samuel 13, I realize God’s devotion to His anointed. To those He loves.

David and his household had fled from Absalom, with the exception of 10 of his concubines. And though I love David’s character, I somewhat resented him because I saw that he didn’t chastise his children as he should have. Truthfully, because I myself am guilty of this at one time or another.

We become so easily offended when we see our own weaknesses in others. Consequently, feeling disdain for that person or thing.

But God knew David’s heart. Absalom had been letting the bitterness and hate that he must have had in his father fester for all that time. (I can empathize with David in this area.) Even though David was not perfect, he loved his children. And although it was David’s punishment for his sin against Uriah the Hittite, Absalom took it upon himself to add to God’s judgment against David for his own selfishness.

There is so much more involved in the circumstances that are unfolding, but I want to focus on God’s love for David.

When David fled, he did so to avoid conflict with Absalom because he loved him. Knowing that he could have killed Absalom. David was astute enough to realize that there were so many other lives at stake.

David was aware that when he prevailed, Absalom’s punishment would have been immediate death for the treason that was committed against the king. Furthermore, there would be no mercy for those who helped Absalom to conspire against him. David had the foresight to evade an imminent war against his own people. Absalom would have been no match for David who had been a warrior from his youth.

So, David was once again forced to flee his home. Consider this situation carefully! David had to escape once again. To relive what he went through just as when Saul was pursuing him. But David trusted God. Even when Shimei cursed him he humbled himself knowing that he was reaping the fruits sown by his past decisions and behaviors. But again, he trusted God.

What really stood out was that while David was being punished, God still provided for him, like the loving Father that he is. People brought him provisions that he needed to sustain himself and those that were with him. Some were sincere and others were opportunistic. David had been surrounded by both from the time he became king and even prior to his succession. Even as he ran from Saul, the LORD kept him.

It speaks clearly to his writing of the 23rd Psalm. It solidifies the anointing that is upon this hymn and the place that David was coming from when he wrote it. One of, or the most quoted Psalm in the Bible. It clearly shows God’s love being magnified. Even when He disciplines us.

Nevertheless, let’s put this into its proper context…The LORD fed, guided, and shielded him. He did not want. Giving David peace in the midst of the turmoil and controversy. He gave him rest and restored him. Keeping David’s feet on the chosen path, because of whom He is.

Even when afflicted, God was there to comfort, console, and protect David. What is key, is that he blessed David in front of his enemies, they were made to see it and even to partake in it, blessing him themselves. And as for David, he was allowed to see God’s judgement against all of them. (This is a spiritual benefit, for God’s anointed.) And the overfill that comes as He blesses us. The goodness, mercy, and unfailing love that follows when we stay in his presence, here on earth, and eternally.

Jesus is worthy of His glory!!!