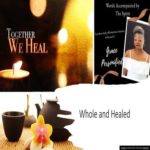 Words Accompanied by The Spirit
Whole and Healed!!! 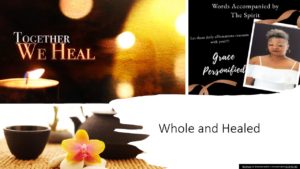 While communing with the Holy Spirit, I felt the urge to read the story of Joseph. He has always been one of my favorite characters.

My spirit is complete as I examined all of Joseph’s circumstances. Through many trials and tribulations, the LORD was with him.

When Joseph was younger his father kept him near to himself. (His brothers must have felt unloved and neglected at times.)

Albeit, as they worked in the fields, Joseph would be sent out to “spy” on his brothers. Directly obeying his father, Israel. As his brothers tended to the tasks that they were sent to execute. (From what is written they lacked character in their youth and as young men. So, they were not trustworthy of their father.)

Seemingly, Joseph, being a “goody two-shoes”, made sure that Israel was aware of their wrongdoings.

The LORD started to reveal Himself to Joseph in dreams. Being immature, he felt it necessary to brag of these dreams to his brothers. Knowing that their father favored him. Hating Joseph even more, his brothers could not “speak peaceably to him”.

After reading all the turmoil of the relationships surrounding Leah and Rachel, Jacob’s (Israel’s) wives, and Zilpah and Bilhah, their respective handmaids, it is no wonder that the vicious cycle of bitterness, jealousy, envy, and hate had been passed on to Joseph and his brothers.

There are so many lessons in this. What is conspicuous is that even though all, but one of Joseph’s brothers seemed to have no guilt when they threw him in the well, they carried the culpability of watching their father mourn for years.

Joseph’s brothers watched Israel in his grief. Bearing the traumatic consequences of their direct involvement.

Albeit, because of this, they changed. They were somewhat repentant, and it evolved into contrition. Regardless of their actions, they loved their father, Israel.

Consequently, Joseph spent many years in prison. But in everything that he did, God was with him. It is vividly clear that these conditions humbled Joseph and intensified his spiritual maturity.

Furthermore, Joseph was highly esteemed. When he was given a position, there was never any doubt that he was qualified and trusted to complete his assignments.

Excelling in all that he did, Joseph never worried about anyone looking over his shoulder. Furthermore, his masters were not intimidated by him.

Hence, Joseph was diligent. Doing all his manner of works before God.

This is very rare today, especially when you are favored of God. But they welcomed his anointing, having enough wisdom to know that with his presence God’s blessings would ultimately spill over into their lives also.

This leads to two essential points. When Joseph revealed himself to his brothers he knew and was content that no situation or circumstance is happenstance with God. There is always a broader perspective.

Consequently, Joseph had no ill feelings toward his brothers. Joseph was able to embrace them, kiss them, and speak kindly to them, from a genuine place.

When Pharaoh became aware, he was truly happy for Joseph. And agreed that his entire family should come up and that they should enjoy the riches of the land. This demonstrated his love for Joseph and that his happiness was important to Pharaoh also.

Joseph and his brothers displayed the epitome of having become healthy, healed, and whole.

The Holy Spirit reaffirmed the importance of not just coming through the predicament, but how you handle yourself while you are in that place.

Lastly, after Pharaoh made ‘careful’ provisions for them to come, Israel and his family were told that they could leave everything behind. Saying, “Do not be concerned with your goods, for the best of the land of Egypt is yours”. Genesis 45:20 (AMP)

This speaks volumes in itself. Showing the gracious character of our heavenly Father.